Check out this exerpt from Wikipedia about the lost City of Norumbega:

"Norumbega (or Norumbègue, Nurumbega, etc) was a legendary settlement in northeastern North America, inextricably connected with attempts to demonstrate Viking incursions in New England.  Like Cathay, it was a semi-legendary place name used to fill a gap in existing geographical knowledge. 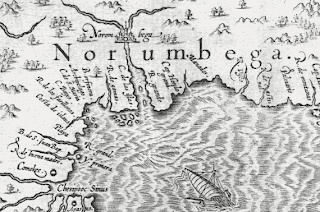 An early reference was that of the French navigator, Jean Allefonsce (1542), who reported that he had coasted south from Newfoundland and had discovered a great river. "The river is more than 40 leagues wide at its entrance and retains its width some thirty or forty leagues. It is full of Islands, which stretch some ten or twelve leagues into the sea. ... Fifteen leagues within this river there is a town called Norombega, with clever inhabitants, who trade in furs of all sorts; the town folk are dressed in furs, wearing sable. ... The people use many words which sound like Latin. They worship the sun. They are tall and handsome in form. The land of Norombega lie high and is well situated."

The word "Norumbega" was originally spelled Oranbega in Girolamo da Verrazzano's 1529 map of America, and the word is believed to derive from one of the Algonquian languages spoken in New England. It is often cited as meaning "quiet place between the rapids" or "quiet stretch of water"." 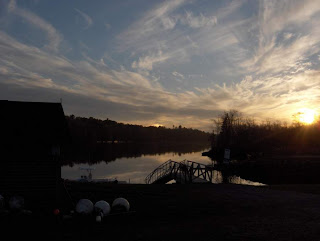 Maybe you've heard of Norumbega...or maybe you haven't.  The subject actually arose during a discussion between myself and Dean Bennett, the Town of Hampden's director of economic development.  You see, Dean and I, have been working on building a waterfront park on the Penobscot River just south of our marina.  The new park will be situated on a spectacular piece of land which forms a 10 acre penninsula.  Chances are you have never seen this piece of land as it has been left undisturbed for about 100 years since Stern's Lumber mill vacated.  Well we were brainstorming about park names, and I remembered this old story I'd heard about a lost civilization somewhere in New England.  Also, I'd once spent a night at the Norumbega Inn in Camden, ME.

Now with all the technology and resources available to the common man like Google Earth and Wikipedia,  Dean and I quickly discovered that the new park actually may be the site of the mythical people.  The Wikipedia entries state that the city lies 15 leagues into the river.  Well, neither Dean nor I could remember how far a league was, but Google was quick to let us know its about 5.5 km.  And, yes neither one of us was very good with kilometers either, so Google informed us that a kilometer is .62 of a mile.  Anyway Dean and I put our heads together and figured out that Norumbega should be about 51 miles from Penobscot Bay.  The Google Earth measurement gave us about 25 miles up from the mouth of the river, but of course that is "how the crow flies".   Well, I'm pretty sure that those Vikings who found the Norumbegans couldn't fly like crows.  Our mighty Penobscot twists and turns like an ornery snake. 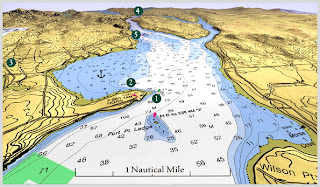 The best we could tell with our limited cartography skills, is that Hamlin's Marina is 51 miles north by water from where the Penobscot opens up into the mighty Atlantic.

The other piece of evidence that pretty much guarantees that Hamlin's Marina is in fact the modern day Norumbega is that all of our boaters here "worship the sun" and many of them are "tall and handsome in form".  I don't know how clever they all are, but I've heard some folks around here speak a language sharing some similarities to Latin.

Anyway, I think the new park should be called "Norumbega Park".  What do you think?
Posted by Dan Higgins at 10:59 AM