The 2013 Portland Boat Show featured a boat unlike any other to land on the planet Earth.  The aptly named, Mastercraft Xstar:
http://hamlinsmarina.com/mastercraft-boats/item/761-2013-mastercraft-xstar,
proved once and for all that a higher intelligence exists in our universe. 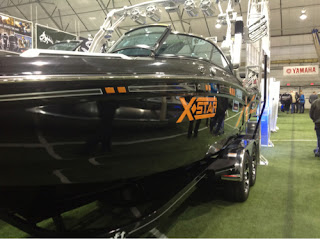 It has been said that the Xstar spent the last six years in development at the Mastercraft labs in Vonore, Tennessee.  This premise is obviously a farce, as no civilian agency could possibly manifest such a marvel of the imagination.

Take for example the dash of this vessel.  From your seat at the helm, a vast array of touch controls begs you for input.  Just when you begin to formulate the number of options available at your fingertips, something else happens.  Digital gauges emerge from the dash like an alien emerging from a cocoon. 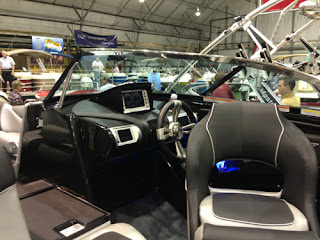 Start pressing buttons, and arrays of cool blue LED lights begin popping up all around you.  Press more buttons and powerful bass tones emit from an army of woofers and tweeters.  When that gets boring, hit another button and watch the wakeboard tower jump up and down at your command.  The experience is other-worldly.  Whoever or whatever created the Xstar is not of this dimensional plane.  It is simply not conceivable to expend this much creativity and effort on a recreational watercraft.  Surely, the Xstar must serve a greater purpose. 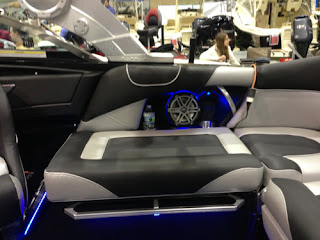 At this point, you may think I'm some sort of conspiracy theorist.  Maybe I'm some sort of quack?  You might think so until you lift the engine hatch and see a 7.4 liter, 522 horsepower engine looking back at you.  The Roger Penske inspired engine is painted orange just to cloak it's demonic intentions. 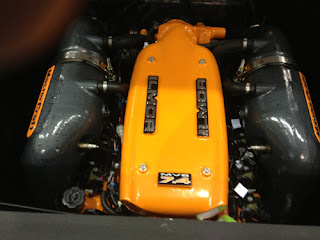 What are you Xstar...Why are you here?
Posted by Dan Higgins at 1:09 AM