I realized a couple of dreams this past Wednesday.  I shot a T.V. episode with the guys from Trident Outdoors and caught a Blue Shark off Monhegan Island.  I got to share the moment with my friend and co-worker Mark Hansen.  Now, Mark has caught a few dozen sharks over the years, and he's told me what a rush it is to hook on to these beautiful ocean predators.  He also told me how important it is to release them unharmed.

I met the guys from Trident at Hamlin's Marina just south of Bangor on Wednesday, September 18th at 6:00 A.M..  The temperature had dropped overnight to a frosty 34 degrees which caused the river to generate a nice convection fog throughout the valley all the way to Penobscot Bay.  Normally when you have thick fog...it's bad enough.  But this ice cold mist was illuminated by the bright sunny sky above.  Bright white frozen mist for 20 miles...it's more than a little unnerving!
My Garmin 5212 with radar allowed for an instrument only cruise down the river.  Technology allows safe travel through zero visibility, but it won't prevent damage from the partially submerged logs common along our waterways.  My wife, Katie, had urged me to layer my clothing and I am glad I'd taken her advice.  My thermal long underwear, fleece middle layer, and outer shells were just the right combination to make this trip a comfortable one.

The fog broke at Fort Knox near the Penobscot Narrows Bridge.  Flat calm seas urged me to drop the throttles all the way to Bayside.  James and Matt of Trident marveled at the ability of our Scout 275 LXF to fly across the bay north of 50 MPH.  I think the windchill dropped to about ten degrees!

Mark Hansen was waiting at the Bayside wharf with armful of gear and an eager look.  It was now 7:30 and it was time to go find some sharks.


The Trident Outdoors and Hamlin's Marina team was armed to the teeth with fishing gear, chum buckets, tackle, and stories.  The first order of business was to catch some fresh mackerel.  Quick trip to Linconville and then out to the breakwater in Rockland.   The sounder showed plenty of activity but those pesky mackerel decided not to hit our jigs.  No matter...we had plenty of frozen mackerel and pogies; they just don't bleed as well.  I offered to cut my hand and drip blood behind the boat if necessary.  I thought fresh homo sapien blood would be more attractive to sharks anyway.  Plus I thought it would make for good T.V.!  Speaking of T.V., Trident Outdoors will feature this shark fishing trip on the Fox Channel starting this January.

From Rockland, we headed out...way out.  In fact we ended out about 100 miles from Hamlin's Marina.  Here's where we ended up trying to find Jaws.  (note:  On the previous Monday, a 15' Great White was tagged in this same area!) 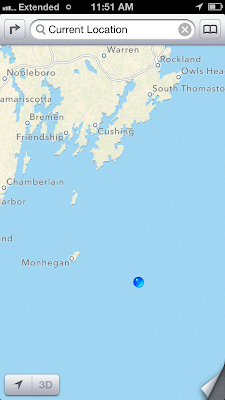 Now it was time to fish!  The action started out slowly.  We had a nice chum slick going and it was starting to draw a lot of attention from Seagulls and other wacky looking birds.  We were in about 300 feet of water and marking huge schools of fish on the bottom.  We half thought about doing some ground fishing, if things got slow on the top water.  The first burst of excitement came from an 80-100 ft Finback Whale surfacing a few hundred yards from the boat.  Thar She Blows!  The Leviathan surfaced twice, and mercifully took an opposite course.

A full hour and a half passed while we drifted across an endless sea of wind driven chop.  Patience was wearing thin.  And then...the most beautiful sound of a reel in free spin.  Shark on!  I grabbed the rod and my clumsy hands tried to tame the beast.  I thought she was gone for a full minute.  No, she was swimming right at the boat...hadn't a clue she was hooked.  Tough mother!  She led me on a dance around the boat...twenty yards to starboard and then twenty yards to port.  Then, straight down!  As she tired, I tired.  On the surface she was a brilliant blue with a white belly.  Finally she fell into a death roll from sheer exhaustion.  I brought all six feet of her alongside the boat.  James told me to give her a pat on the nose.  Out of sheer excitement I complied and wondered if I had taken a terrible risk.  James assured me that the shark was no threat as her fins had cleared the water line.  James cut the steel leader and off she went back to the cold clear waters of the Gulf of Maine.  My veins filled with adrenaline as I laid exhausted in the bow.

Two more beauties were landed.  They were a bit smaller in size but bigger in fight!  Then, when we were all spent we made the hundred mile trip back to Hamlin's via Bayside to drop Mark off at the wharf.   One hundred miles in just over three hours!  That's what a Scout 275 with twin Yamaha F200s will do for you.

We finished off the day with a hearty meal at McLaughlin's at the Marina.  Twelve hours of fun, adventure, and companionship on the high seas isn't a bad way to spend a Wednesday!