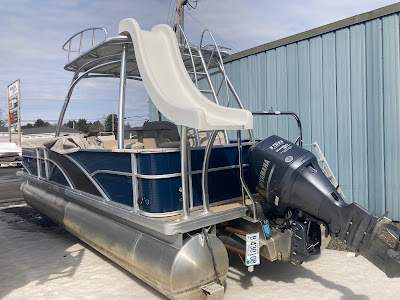 I really don't want to incite a riot, but Hamlin's just took in a 2015 Sweetwater 240 Premium Edition Sundeck slide boat with a Yamaha F150.
Truly a Great White Buffalo...this is your key to family entertainment in the uncharted waters of 2022.  This boat is so much fun that it should be illegal!  This Sweetwater features two levels of entertainment, a full bar, and a freakin' water slide.  For real! 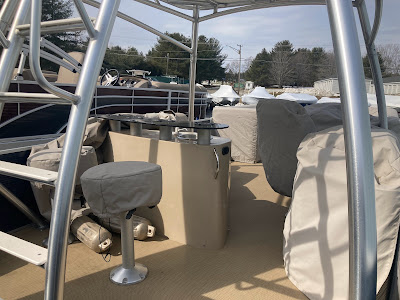 The last time a used double decker pontoon boat hit our lot, we had three potential buyers driving to the lot from New Hampshire, the County, and Calais.  No one would give a deposit until they saw the boat.  The guy from Calais hit the lot first and secured the buy of a lifetime.
The couples from the Live Free or Die State & the folks from God's Country arrived shortly later only to learn they missed out.  They hollered, cried, and threatened the salesman with bodily harm.
As the guy from Calais drove off into the sunset with his proper cache, we noticed a couple of black vehicles tailed him down the road.
Later that week, we heard that a Downeast man had gone missing.  He had recently purchased a boat from Hamlin's Marine.  It apparently had been stolen from his yard.  To this day, this man has never been seen again...nor has his beloved Sweetwater been located.
Most of this story is pure fiction...but not all of it.
This Used Sweetwater Slide Boat is on the lot in Waterville, and and the first $45,900 takes it home!
Update...this boat sold with in hours of this post to a good friend!
All these thoughts about summer had me thinking about the time we took out a couple of Bennington flagship 10' wide pontoon boats on the ocean.  Check out this video:
We have a full inventory of Godfrey and Bennington pontoon boats at our Waterville and Hampden locations now.  Please join us at the Belfast Freshwater Boat Show on March 24th-27th.  You can register for the show here: https://www.hamlinsmarina.com/bfbs-2022
Everyone who registers and attends the show will be entered into a drawing to win a free outboard!
Posted by Dan Higgins at 8:45 AM