Weldcraft is the New King of Maine Waters

Many years ago, the undisputed champion of Maine waters was Lund Boats.  Back then, Hamlin's Marine sold Lund Boats rigged with reliable Yamaha and Honda outboards.  Like many other brands, Lund was purchased by a big corporation that favored Mercury outboards.  Game over for Hamlin's Marine and many of our loyal Lund customers.

Hamlin's Marine helped to build a new champion in Maine.  Polar kraft boats grew from a little known brand into one of the best selling fishing boats in Maine.  Click Here for the complete story on the switch from Lund to Polarkraft way back in 2011. 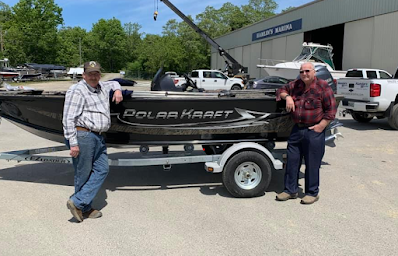 Then cracks started to show at Polarkraft with several ownership changes.  All good things must come to an end, and another King was destined to fall.

So, five years ago I went in search of the ultimate answer.   I drove way, way out west until I hit Clarkston, Washington.  I passed through a foreign world of ghost towns, dust, and smoke.

When I finally arrived at the Weldcraft factory, I learned what the term Stackin' Dimes meant.


The Weldcraft plant does things with a level of precision I've never seen at a boat plant: