Yesterday I had an epic boating adventure that will not soon be forgotten.  The setting was perfect...bright sun and a slight breeze beckoned us to the marina just as we buttoned up our work for the day.  Our crew of twenty was a combination of battle-weary Hamlin's employees, friends, and a handful of excited little girls.  We left the docks around six and bombed down the river from Hampden to Bucksport.

The Bennington 28RSBX is a super boat by any measure.  A standard pontoon boat measures either 8' or 8.5" wide (beam).  This boat is 10' wide and features Bennington's exclusive ESP- 10' Wide Beam performance triple pontoon package.  What that means is that there are (3) 32" diameter oval pontoons running over 28' long underneath the deck.

Our boat was powered by Yamaha's only V8 model, an F350XCA.  The boys from Puffin Boat Co painted this particular motor Pearl White to match the fiberglass base of the swing back seat.  The boat looks hot!

As we rounded the bend in Winterport toward Bucksport, we could feel the temperature drop and felt the tell-tale turbulence of the turning ocean tide.  The Bennington's platform was super stable and dry and would put any Deep V boat to shame when it comes to overall comfort in the slop.  After a quick landfall in Bucksport to take advantage of the public restrooms, we turned back up river to our destination...the Bangor Waterfront to poach a concert on a beautiful night.

Imagine Dragons rocked the waterfront, while twenty friends made quick work of a floating dance floor!


Hamlin's Marine recently welcomed Ted Ross to our sales team in Waterville.  From his very first day, we knew that Ted was special.  He isn't one of those guys that comes around very often...maybe once in a generation.  It's not many that can carry a nickname like "Teddy Ball Game".

The other "Teddy Ball Game" was Red Sox royalty and one of the greatest hitters that ever lived.  Ted Williams also served 39 combat missions as an aviator in the Korean War.  When Ted wasn't hitting home runs, or shooting down bad guys over the South Pacific...he was busy becoming a legend in the world of fly fishing.  The old-timers around Bangor still talk about spotting Ted at fishing camps up north or on the famous Miramichi River in Canada.

Ted Williams has passed to the afterlife, but there is hope that one day he may return.  After all, Ted's been Cryonically Frozen in the hopes he will some be thawed out and re-born.

Until then, we still have our own "Teddy Ball Game", and he is happy to help you purchase your next boat from Hamlin's Marine.  Like Williams, Ted Ross is multi-talented.  Our "Teddy Ballgame" is an avid skier, golfer, and fisherman.  He also has a wicked sense of humor!  Check out this video of Ted when we told the local Hibachi restaurant that it was his birthday (it wasn't...) 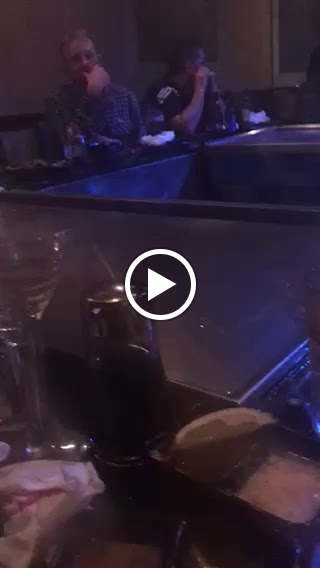 Ted started with us earlier this year and has done an outstanding job learning our product lines.   You'll find Ted to be a pleasure to work with and willing to spend all day to help you find the right boat for your needs.

In fact, Ted has already become our leading Alumacraft salesman this year, and can make sure you get the right boat with the right equipment to get on the fish.
Posted by Dan Higgins at 9:48 AM No comments:

It's Time to Think About Boating Again


Hamlin's Marine and Puffin Boat Co has been busy digging out and preparing for our first show of the year in Boston, The New England Boat Show.  The show runs from February 10th through the 18th and features one of the largest indoor displays of new power boats and sailboats in the world.

Early reports from the New York Boat Show reflect record breaking sales due to increased consumer confidence and a booming economy.  More families are moving forward to purchase new boats meaning that more people will be having more fun on the water this year.

A growing economy will mean new boaters will be in the market once again.  The joy of being on the water isn't easily described.  Boating lends a feeling of freedom and fulfils a sense of adventure.

When I look back to 2004 when I first started in the business, I remember the same climate of optimism from our customers.  Many young people and growing families sought the adventure and freedom of boating.  The satisfaction of introducing people to our world of boating was so much fun!

For the last ten years, the boating industry has been through a cycle of extremes.  For many years manufacturers and dealers went into survival mode.  Manufacturers struggled to keep their doors open while dealers squeaked out a living serving their base of seasoned, life-long boaters.  Nothing stands between a life-long boater and getting on the water...not even a sluggish economy.

But over the last couple years, our industry has come roaring back.  Manufacturers are building larger and more feature-rich boats once again.  Boat engines have shifted from heavy, maintenance hogs, to lighter and more efficient outboards.  Pontoon manufacturers have lost the stigma of just being grandpa's boat, and they are delivering luxury and performance that rivals any fiberglass alternative.

Here is a sample of innovations and highlights from each of our brands:

All of us at Hamlin's are looking forward to seeing you on the water this spring!  Come see us in our showrooms and at the boat shows!
Posted by Dan Higgins at 5:39 AM 1 comment: