One day, I jumped in one of our Scout fishing boats at Hamlin’s Marina and headed for Castine.  Before I left, I grabbed a massive quantity of fried clams from McLaughlin’s at the Marina.  The clams were so good that I ate until I passed out! 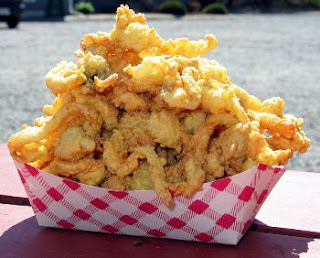 When I came to, I had drifted way off my course.  I was out past the Merchant Islands...past Isle au Haut even!  The seas had picked up, and I ended up crashing ashore some distant island.  Luckily the Scout was unharmed.

A flock of exotic colorful birds came to my rescue and nursed me back to health.  I’d learn later that these beautiful orange, white, and black creatures were Puffins.

The Puffins fed me herring to nurse me back to health.   They told me not to eat any more fried clams as the raw herring was better for me. I regained strength and vowed if I ever made it home I’d return to honor the colony in some way.  Eventually Hamlin’s service manager, Reid Garrity, spotted me while he was out shark fishing and returned me to the Hampden docks.

I immediately purchased the Puffin Dinghy company and transferred it to Hampden to honor my saviors.
Yesterday, I piloted our flagship 1060 Puffin powered by a 2.5 HP Yamaha all the way to my distant Puffin colony. 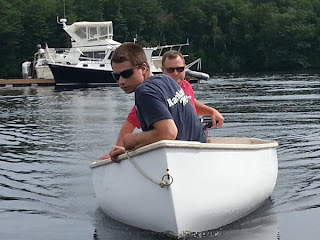 The King of all the Puffins greeted me on the rocky shore, and we discussed plans to grow distribution of Puffin Dinghies around the world. 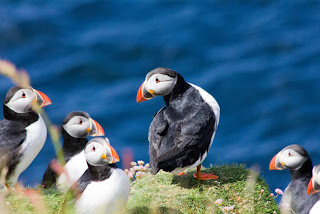 Pen Bay Explorers Trip to The Celtic Festival in Belfast

Hamlin’s own Pen Bay Explorers recently joined up for a trip to Belfast during the annual Celtic Festival.


Our group was scheduled to depart Hamlin’s Marina on Saturday, July 20th at 10:30 A.M..  As with all of the Pen Bay Explorers trips, we were delayed with preparations and a captain’s meeting.  I think our motto should be “Pen Bay Explorers...Never on time!”


All boats were headed downriver at about 11:15 A.M. and we used 68 on the VHF as our common frequency.


There were a number of different sized vessels in the group, and we found that cruising around 26 MPH worked out best for everyone.  That was after one over loaded cruiser dumped crew onto other member vessels.  Situations like these make it convenient to be travelling in a group!


Cruising conditions were fair until we passed under the Penobscot Narrow Bridge.  Then, conditions became a little dicey.  The famous Penobscot chop was in fine form; it was a very bumpy, wet ride through the gut to Fort Point.  At one point, the screws on my roof hatch over my helm seat backed out and I had a piece of hardware crash down on my head.  I’ve had a number of concussions over the years, so I don’t think I did any additional damage!  Despite the conditions, the group pounded through finding that keeping up on plane was the better alternative to slowing down and going through the spin cycle.


Belfast Harbor was a welcome refuge from the seas, and the Belfast harbor staff helped us tie up and hook up power.  The staff in Belfast is top notch...professional and friendly!


The Pen Bay Explorers hung out on the docks for a few hours trying to beat the sweltering heat.  My crew decided to take a swim in the harbor.  The frigid water felt good even though we carried an aroma of diesel fuel the rest of the day!


Keeping the Pen Bay Explorers together at an Irish festival is like shooing chickens in a traffic jam.  Crews were spread out all over the waterfront from the music stage, to the Guinness tent, to the ice cream parlor.


My crew ended up at Three Tides feasting on oysters and appetizers and tasting unbelievable hand-crafted brews.  Our gastronomic bliss was broken up by a quick glance at my IPhone’s Doppler radar ap.  There was a very dark red blob on the screen about 20 minutes due west of Belfast.  That blob was a microburst storm carrying horizontal rain and extreme winds.


I bolted down to the boats like Paul Revere gathering the men, women, and children of the Pen Bay Explorers.  Then,  we made a mad dash across the waterfront through hordes of Gaelic minions to the shelter of my mother’s house.  The ominous, charcoal clouds unleashed a hell storm just as we reached the home.


Others Pen Bay Explorers took shelter aboard their boats and listened to the sheets of rain pound their cabins.  A dinghy took flight and sailed past a porthole in the spirit of the Wizard of Oz.


But just as the storm blew in, it left...leaving cool, clean ocean air.


The evening that followed delivered memories that will last for ever.  Our family of boaters wandered, relaxed, and hung out the way only boaters know.  The night was capped by a grand fireworks display over the harbor.


Sunday morning was a leisurely affair with fair, cool weather and favorable seas for our return voyage.


I hung out with one new boating family, that hosted an impromptu breakfast of freshly grilled biscuits, bacon, and blueberry coffee from the Keurig machine.  I returned the favor by checking the fluids and bilge, as they were on their first leg of a journey to Cape Cod.  The following evening they were in Boothbay Harbor.


The remaining five boats left the docks promptly at 10:30 A.M. for a picture perfect cruise back to Hampden.


The Pen Bay Explorers proved our bravery and commitment to leisure once more.  Check out some of the photos! 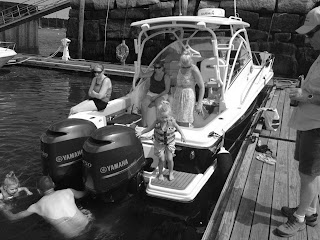 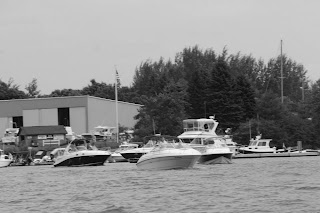 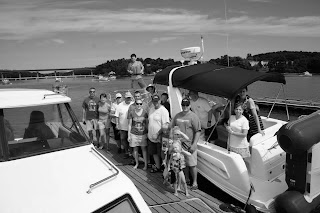